How and Why to Shoot TIME-LAPSE Video

Home » Video Creation » How and Why to Shoot TIME-LAPSE Video

This video covers with why, where, when, and how’s of shooting Time-Lapse from a broad perspective. I think every video content creator should be shooting time-lapse for their videos.

I recorded most of time-lapse clips in this video with an action camera, the SJ7 Star and also with my main camera, the Panasonic G85.

Both of those cameras were new to me at the time so I wanted to try them out before putting them to use in homesteading, building, and gardening video projects.

There’s some real advantages for using these small action cameras for time lapse. They can stand up to elements like rain, dust, and in my case, a lot of sawdust.

They are small and discrete so they can be tucked into corners or clamped and hung almost anywhere and they don’t attract a lot of attention.

attached to fence with arm

They have a built in wide angle lens to capture an entire scene. They are relatively inexpensive and it’s easy to add an external battery for hours and hours of recording.

But, why shoot time lapse anyway? Sure they create some pretty pictures, but what’s the practical side to it?

In a broad sense, it can increase the production value of your video simply by having a variation of footage, angles, and styles. Time lapse can be informative and quite entertaining and funny sometimes.

It’s a great way to speed up a long process or to dramatically compress time.

You can always speed up regular speed footage but it can be much more economical to only capture the few frames a minute that you need. And time lapse is very easy to set up. You set it and forget it and let it run. You just need adequate disc space on the camera card and long battery life. 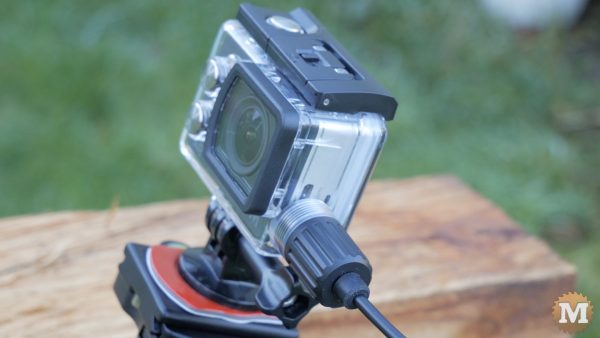 And having some time-lapse footage is a kind of insurance in case something is missed during a shoot, or you lose footage by some mishap.

So where do you set this up? Usually where you can cover all the action or show an angle that your main camera cannot.

This is where the wide angle lens is an advantage. I also look for any dramatic weather or changes in weather.

Any windy day is usually accompanied by swift and dramatic cloud movement. An don’t miss an opportunity to record a weather front or a storm approaching.

When do you set it up? It should be your first camera that is running that day. Have it recording while you are setting up the rest of your location or your scene.

Most viewers will enjoy a brief peek behind the scenes. And if you are early enough to catch it, sunrises and later on, sunsets can be very dramatic and interesting.

If you have a multi day project then a sunset time-lapse can visually indicate this passage of time to your viewers.

How do you set this up? The key is to always be ready to go. Have your card formatted, batteries charged, camera pre-set, and the tripod or clamping attachment ready.

I have variety of tripods, flexible clamping arms, and a suction cup. It’s a good idea to have a safety tether on the suction cup in case it comes loose.

I clamped this cup to the hood and ran the tether into the door frame and closed the door to hold it in place. That’s a bit of extra insurance.

But in most cases you will have it in a fixed position, and mounted securely to a tripod. Once you start recording images, don’t touch the camera again until you are done. You won’t be able to change batteries and get it back exactly where it was. 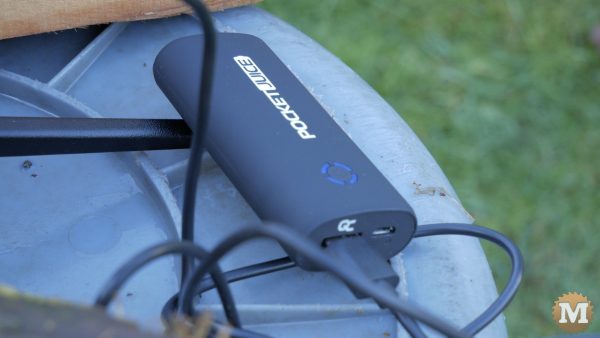 Hence the need to an external, long lasting power source.

The display screen at the back of the camera turns off after a while. I can hear it taking a picture so I can tell it’s still running.

The best way to be ready is to shot many test sequences as soon as you get any new gear. Every camera is different.

One general rule though is to have everything set on manual, your white balance, exposure, shutter speed, focus, etc. In most cases, you don’t want the camera making any auto adjustments as the light or conditions are changing through the day. There are specific exceptions to these rules so experimenting with your own gear is a must.

I always prefer to have the camera shooting still images, or in photo-lapse mode instead of video. I find it more comforting to know there’s an image written to the card every few seconds.

Some cameras can generate a video file at the end of a pre set session but I worry that all will be lost if the camera fails or a battery dies part way through. With stills at least you should have a sequence on the card up to the point of failure. That just might save the day.

I like to shoot at 4K even if I publish my videos at 1080. This gives me room to crop or adjust the scene framing to my liking or to simulate a camera move in post production.

I encourage all video content creators to add time laps footage to their projects. It does not cost a lot and the added value is huge.

setting sun through a swirling fog

DISCLAIMER: Some of the links on our site are affiliate links, so if you purchase or sign up via these links, we make a small commission from it, at no cost to you. We thank you if you choose to support us this way. THANK YOU!

See a full list of other Tool I Use.

We have a little homestead on Vancouver Island and strive to make ourselves more self sufficient. I love to design and build, garden, and of course, work with all sorts of tools.