A simple wooden cutting board modification for a friend who had an unfortunate accident.

Background for the Project

Make a One-Handed Cutting Board! A neighbour of mine had an accident on his farm and damaged tendons in his hand. He loves to cook and is having difficulty with that after his surgery. They repaired the tendons and now he’s in a cast for 6 weeks. He asked me to make some modifications to an old cutting board so he could use it one-handed.

The One-Handed Cutting Board Plan

We sat down and came up with a plan for how we want to modify this existing cutting board. 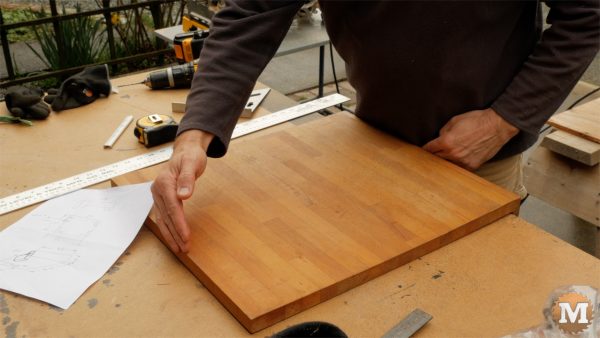 When it sits on his counter it’s too deep this direction so it makes sense first of all to rip a strip off of this end.

And then that strip will go on the right hand side as a stop. And we’ll make some stops on the top two corners and one on the left side as well.

I’ll mark the first stop to notch out the corner. Then set the fence on the table saw and run it part way through to a pencil mark I made.

I’ll finish the rip cut and corner cut on my bandsaw.

Next I’ll mark the screw locations on this stop and countersink each a quarter inch deep with a forstner bit on the drill press. I want the screw heads to sit flush.

I’ll drill the rest of the way through with an eighth inch bit.

The animation above is from the latest version of the forms and the easiest to build and cast.

Tools Used in this Project

Tools I Use: If you would like to support this blog, and the videos I create, then see the list of tools I use regularly. Thanks!