Build your own Timber Frame Woodshed for Firewood Storage and Drying. Plans available for download in PDF Format.

We heat our house with wood and need a drying and storage shed as close to the wood stove as possible. There’s a perfect spot right beside the house here that has easy access through the front or back door. It’s also close to the driveway for loading with my truck.

I made the braces the day before using 2×8 full dimension red cedar. 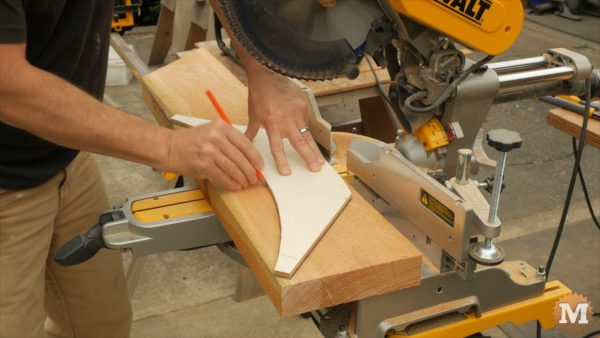 I laid out and cut a plywood pattern according to the plans. I trace the pattern then cut opposing forty five degree angles on the miter saw. 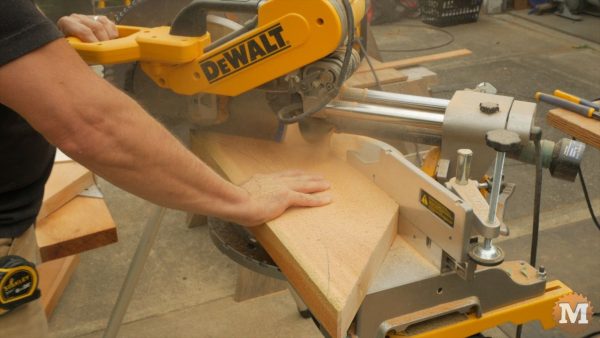 This ensures the brace will be ninety degrees.

I cut the curved sections on the band saw. 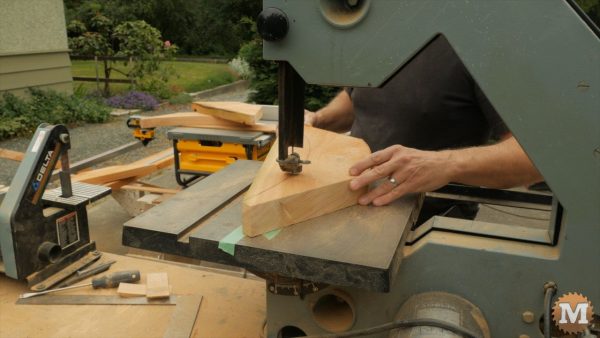 Cut the brace curves on the bandsaw

I sand this cut smooth with a small hobby belt sander. 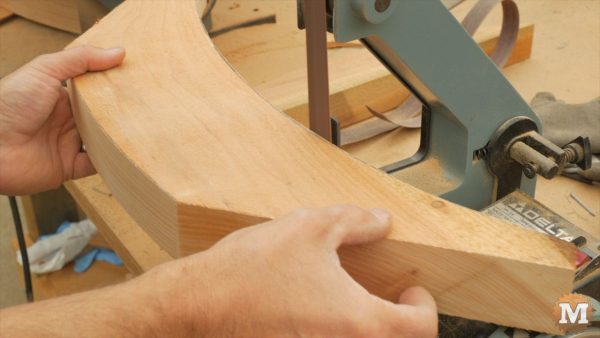 Sand the curved cuts smooth with a hobby belt sander

The flexible sanding belt follows the curve of the brace quite well. The braces will be attached to the shed posts and beams with a long lag bolt at a twenty degree angle to help pull the brace tightly into the corner. 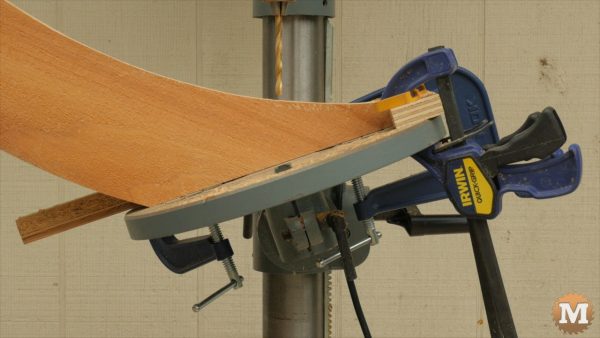 I tilt the table on my drill press to this angle, mark the hole center, and clamp some simple stops to the table to hold the pieces in place. 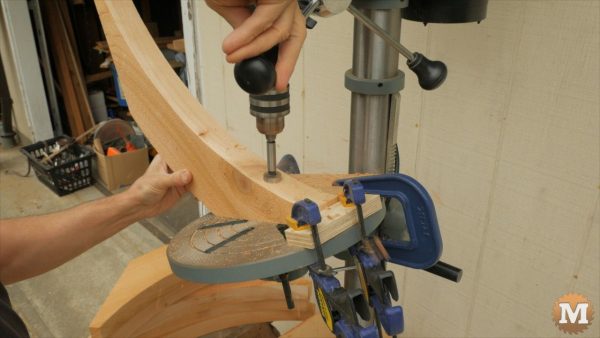 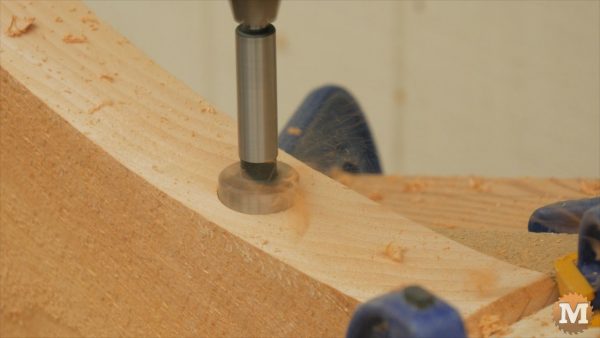 A countersink with a forstner bit drops the head of the bolt neatly below the surface. Then I switch bits to drill the pilot hole for the shank of the lag bolt. 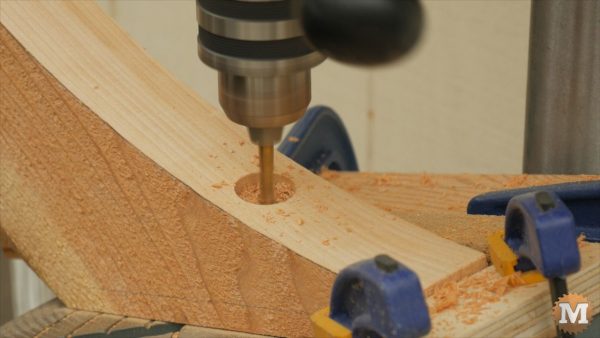 Then drill through with bit

Using my angle grinder with a sanding disc, I bevel the edges of each corner braces except the edge that mates with a post, girt, or beam. So all the outside edges. 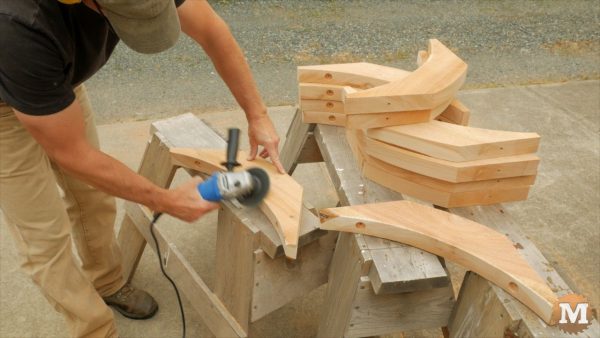 I mark the post and the beam one inch in from the outside edge to guide the brace location. I hold it securely in place and drill into the post and beam and drive in a lag bolt with an impact driver. 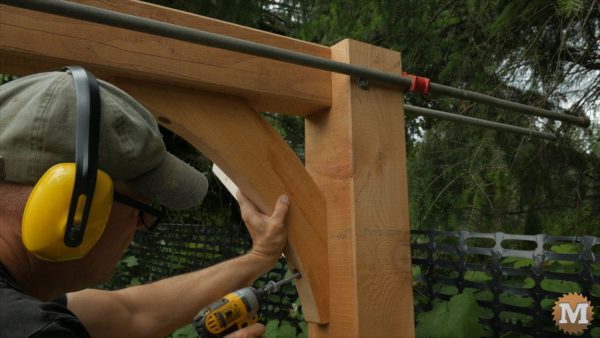 For this project, this simple brace is more than enough to give the structure rigidity. A brace with a proper tenon that is mortised into the post and the beam is always the best option, but for this small wood shed I think a flat mounted brace with a long, angled, lag bolt is enough.

On the other side of the shed I’ll attach the girts to the posts in the same fashion. 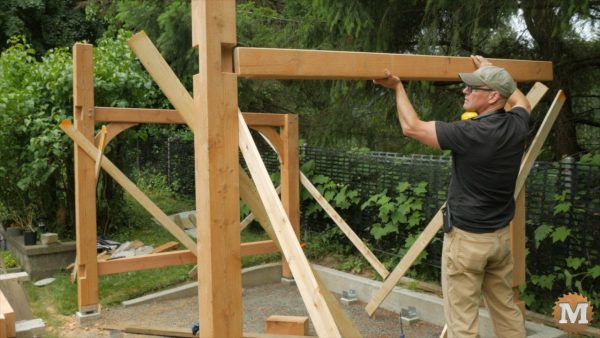 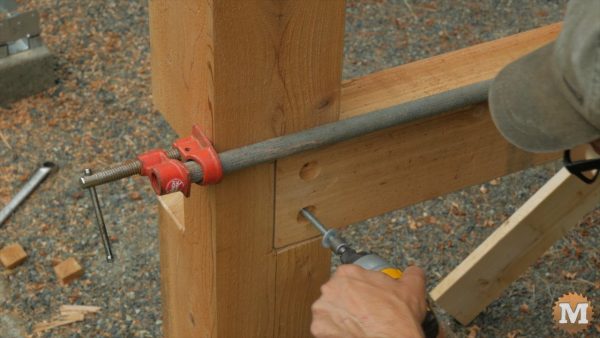 Secure with a long bar clamp, then drill and run in some lag bolts into post

I countersink and secure the lower girts to the posts with lag bolts. And attach the corner braces.

At this point I’ll apply two coats of a semi-transparent stain with a small roller. 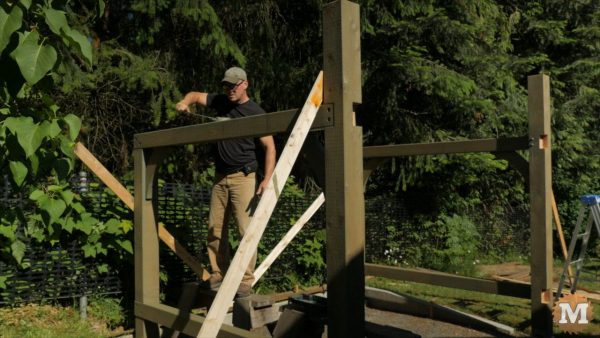 Apply a semi-transparent stain to the frame

This green colour will match the paint on the house. It’s easier to stain the frame now than later when the roof and walls are on. I try to pre-stain as much as possible or when it’s convenient. 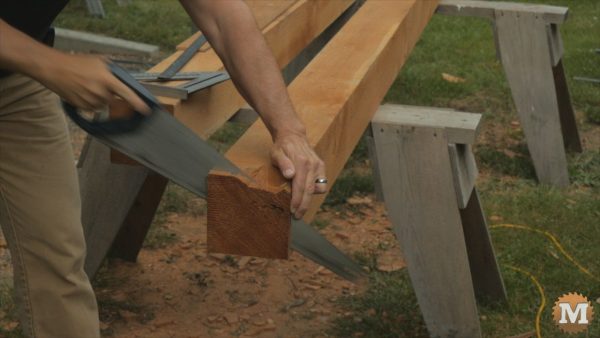 Cut the long beams and four sides with circular saw, then finish the cut with a hand saw

Now I’ll select the long front and rear beams and cut them to length. They are a bit too big for my miter saw stand so I’ll cut them with a circular saw. I mark all four sides with a square, make four cuts, then finish off the middle with a hand saw. 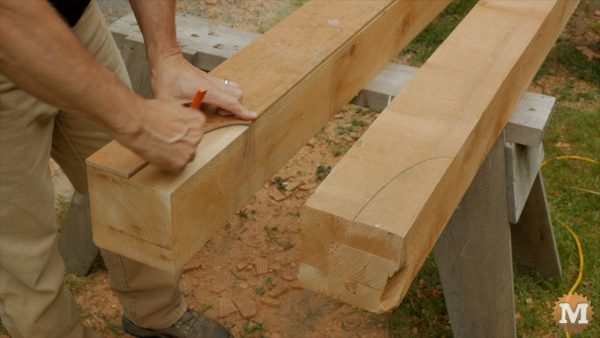 Trace the ellipse profile on the end of the beams

The beams have a quarter ellipse profile cut into the ends. I laid out this pattern on thin plywood and trace it onto both sides of the beams at each end. 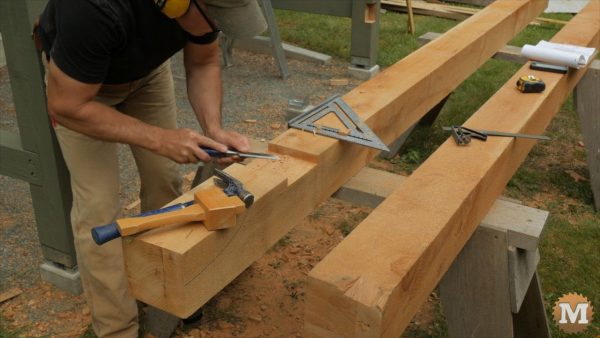 I measure the distance between the posts and transfer these dimensions to the beams. I want these beams to sit down on the posts by an inch. I’ll cut these wide grooves with my circular saw and clean them up with a chisel. I think this looks better than simply attaching the beams to the posts on the flat, and it prevents the posts from twisting and the structure from racking.

I bought a new jigsaw specifically to cut these end profiles on the beams. 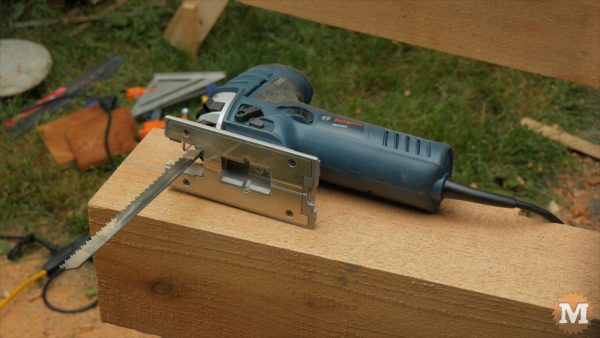 Some research led me to the Bosch with it’s seven amp motor and it’s sturdy guide that helps prevent the blade from wandering. I also bought some long blades that will cut at least six inches deep. 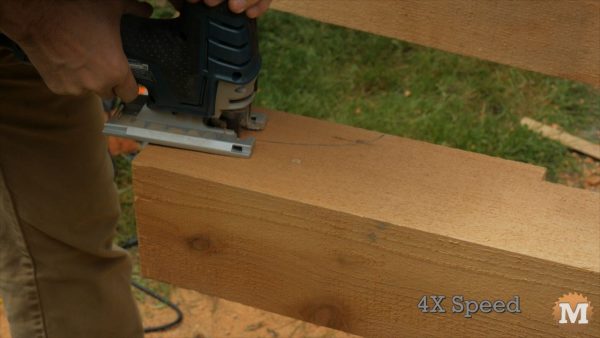 These blades are fairly wide so I wasn’t sure if I could cut the sharp elliptical radius. I decided to start from the end and work my way in and try to keep to the line as best I could.
The vibration moved the beam on the sawhorses so I had to stop and weigh them down. 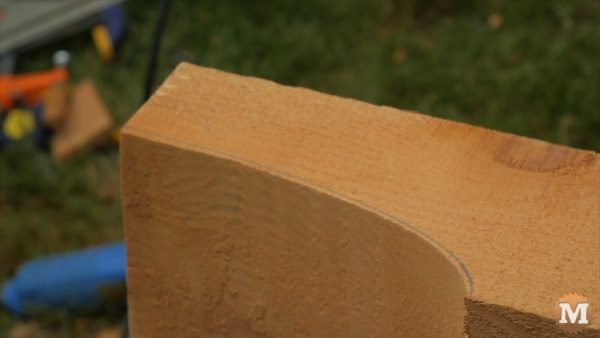 I was happy with the result and I only had a small degree of wander or pushoff. 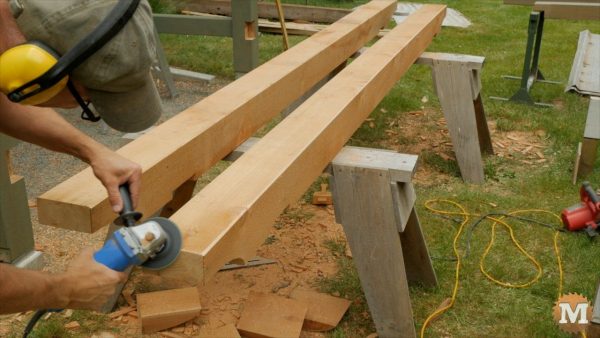 Chamfer the beams with a power hand plane, then finish with angle grinder

As before, I’ll chamfer the edges with a power plane and angle grinder. 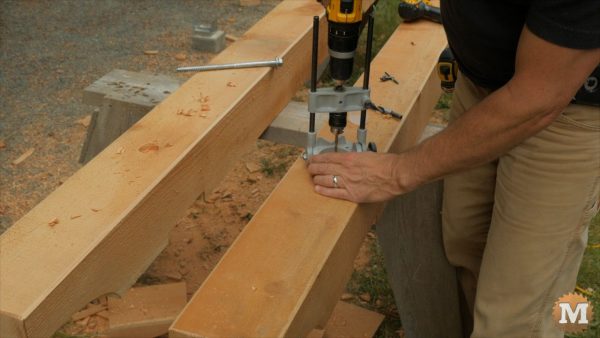 The beams attach to the posts with a long lag bolt. I’ll countersink the head with a forstner bit, then drill a pilot hole straight and square with a drill guide, then finish with a bit slightly smaller than the bolt’s shank. 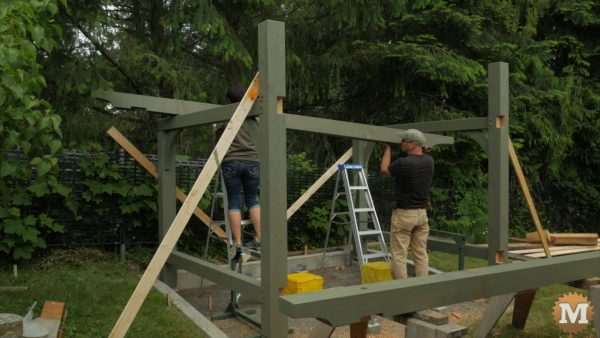 Setting back beam in place with help from my wife, Marilyn

To place the beams I enlisted the help of my wife Marilyn. It’s definitely a two person job. Red cedar is not a heavy wood, but too awkward to do this safely single handed. The rear beam fell into place easily. 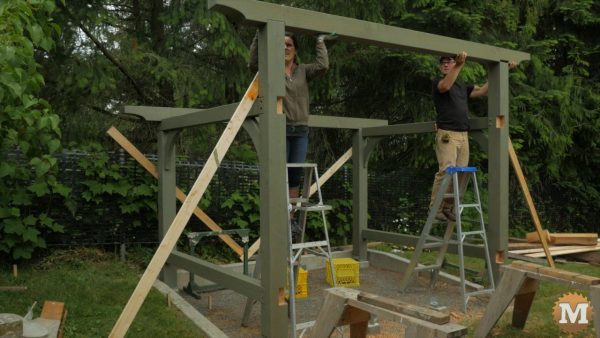 Setting the front beam in place

The front beam was tight so I tapped it in with a hammer. 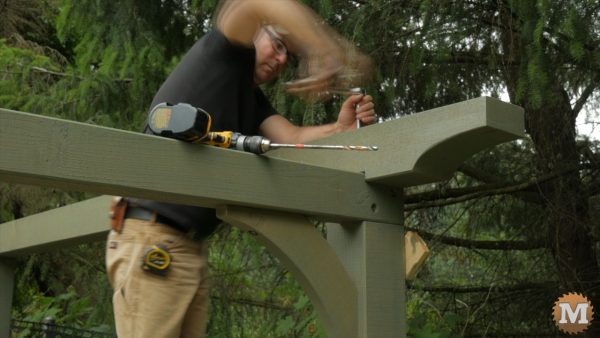 Drill through beam and into post. Then run in long lag bolt

I drilled into the posts with a long bit, then secured the beams with big lag bolts. I’ll attach the braces to the posts and beams. Now I can remove the temporary bracing.

4×4’s for Back Wall and Front Door

Back wall is supported with two 4×4’s

The back wall of the shed has two vertical 4×4’s to add additional support to hold the weight of the stacked firewood. These are cut to length, screwed into the saddles, plumbed, then secured to the rear beam with screws. Across the back will be a pair of horizontal 2×6’s. 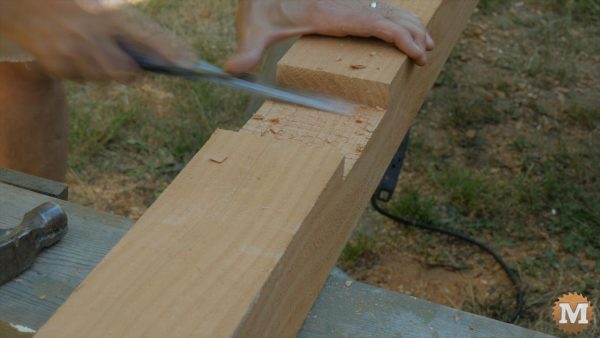 The front doorway is made from 4×4’s and installed same as the back wall except that they will have slots cut in to accept the front cross members. 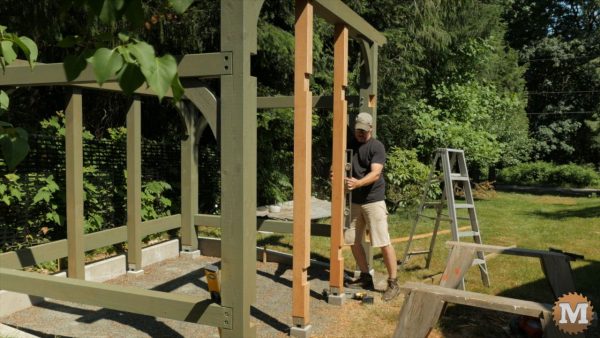 Stand up and secure doorway posts

They are identical to the girts except only shorter. 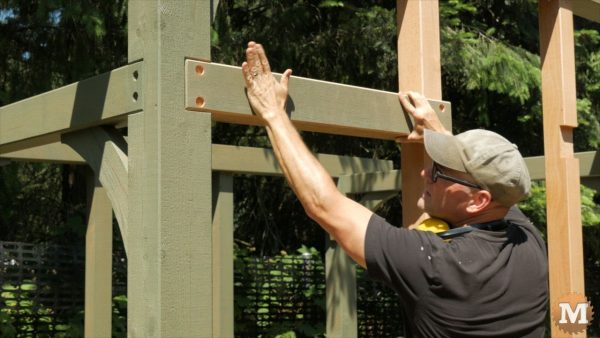 I countersink and drill the ends then tap into place. Then drill into the posts and run in some lag bolts. 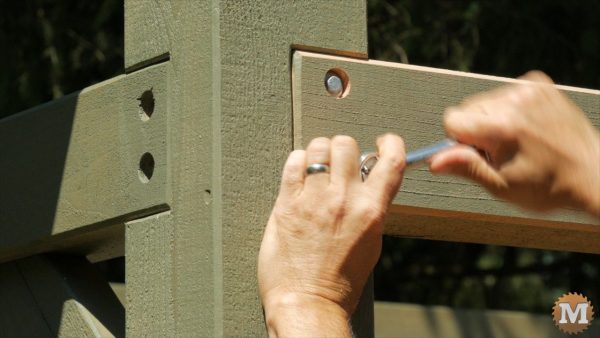 Drill then run in some lag bolts. Hand tighten with socket wrench

I’ll hand tighten the last few turns with a socket wrench so I don’t strip the wood out or break a bolt. 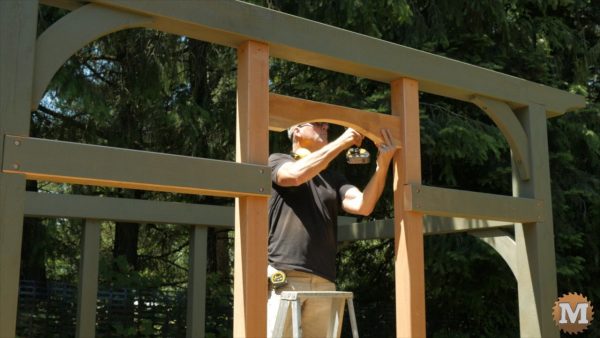 The doorway header is cut to length on the miter saw then the curve copied from a brace and cut on the band saw. It’s toe screwed into place.

We have a little homestead on Vancouver Island and strive to make ourselves more self sufficient. I love to design and build, garden, and of course, work with all sorts of tools.