Build your own Simple Cedar Pergola.  Plans available for download in PDF Format.

For this blog post I’d like to go back and revisit a pergola I built a few years ago.

This build was prior to the launch of this YouTube channel but the construction and assembly of this structure is fairly straightforward so I’ll use some animation to show you how it was done.

It’s made from rough sawn Western Red Cedar. And it’s located in the sunny, side yard of this residential house. Space was limited but the open design of a pergola lends itself well to this. This ended up being a great place to build a pergola.

Each post sits on a round concrete pier that’s spaced 8′ 6″ inches on center. The overall height of the pergola is also 8 foot 6 with a head clearance of 7′ 3″. The concrete footings are poured below the frostline.

The posts are 6×6 and attached to galvanized saddles.
Four beams are bolted to the posts and run North to South. Ten rafters sit snuggly over these beams. They are grouped in pairs running East to West. Eight corner braces are attached either to a post and a rafter or to a post and a beam.Topping the structure are five louvers. These are also notched so they sit down on the rafters.

To lay out the location of the footings I’ll use batter boards. I pound stakes into the ground and attach ledgers.

I used a laser level to set all the tops of the batter boards on the same level plane.
Mason string weighted with bricks is strung across the boards on 8 foot 6 spacing. The strings are squared to each other by marking a point 3 feet and 4 feet from the intersection with a sharpie. Then adjusting the strings so these marks are 5 feet apart diagonally.

Another way to check for square is to measure diagonally intersection to string intersection and adjust until the distance is equal.
This is the same way I laid out the footings for my Garden Pavilion.

When everything is squared, a plumb bob is suspended at this intersection to mark the center of the hole. The hole is dug and a Sonotube is dropped in. The batter boards and strings are used to set a consistent height for all the tubes. I secured these cardboard tubes with additional stakes holding the tops 3″ above the lawn.

I dug below the frost line and opened up the hole at the bottom to create a wider foot (or base) for the column.
I mixed up a few bags of concrete in my wheelbarrow and filled each form. I set a 6×6 post saddle into the concrete before it set up.

Tools needed to build a pergola

Some simple tools are all that’s needed to build a pergola for this first part. A circular saw, a handsaw, a large speed square, plus layout and marking tools

The posts are full dimension 6″x6″. This entire pergola is made from lumber supplied by my friend Jay. He has a portable mill and is a meticulous and accurate sawyer. I brought the rough lumber to the site and laid it over sawhorses for marking and cutting.
For this video, I had enough extra cedar lumber from other projects to show almost all the steps required to make each part of the pergola.

I draw a pencil line around the post on all four sides. If it’s square and true the lines will connect.

Each post is cut to length with 4 cuts using a circular saw, rotating the post a quarter turn each time, then finishing off the cut with a hand saw.

The top of each post has a 30 degree slope. This is mainly for aesthetics. I just liked that look. Pencil lines are drawn using a large speed square. I free handed the cuts for the front and back. Then I adjusted the angle of the blade and made the side cuts. Then finished with a handsaw.

I chamfer the top edges of the post with a sanding disc on my angle grinder. And the rest of the corners with the power plane. I like this look and I do this on other outdoor structures I’ve built. I think it’s worth the extra time.

You could use the angle grinder for all the chamfering but, I find the power plane works better on long runs.

These posts are then set in the saddles, tilted up, and plumbed with a spirit level. Stakes are driven in and temporary braces hold them in place. Screws are driven through the saddles into the bottom of each post.

The next step, to build a pergola, I then cut the four 2×8 beams to length. Mark a 45 degree angled section for the end profile and mark the locations for the carriage bolts that run through the posts on the two outermost beams. These holes are drilled with a guide.

Now I cut off the angled piece with circular saw and square. These are also chamfered with the angle grinder and/or the power plane. I stain most of the pieces prior to assembly. So much easier to do on sawhorses than up on a ladder later.

I attach some guide blocks to the posts and set the beams in place.

The beams are clamped to the posts and checked for level. I then drill through the beam, the post, and the opposing beam with a long 3/8 bit. I tap in a carriage bolt and secure it with a flat washer, a lock washer, and a nut.
Now the support blocks can be removed.

Animation of a Simple Cedar Pergola

A short animated sequence showing the main parts of a simple cedar pergola.

Please Pin to a Pinterest Board of your choice. 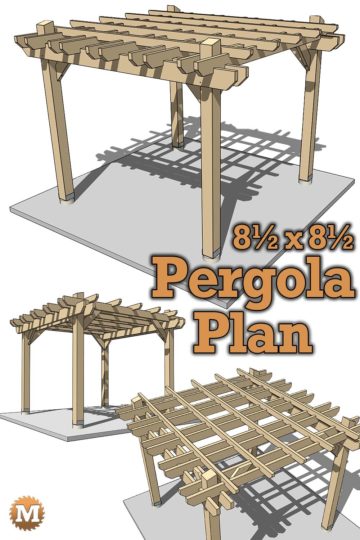