Set the front and rear supports aside for now to start working on the main body of the jig. Cut the 1×8’s down to 30″ lengths. I bought a few extra in case I find a few cracks or checks in them. I used pine for this but cedar would stand up to the weather better.

I set a stop on my saw support so I could quickly make these cuts without measuring each one. And this went pretty quick.

I then took the stack of these boards over to the drill press and drilled four holes in one end. I set up a simple guide and stop block. The holes are offset from the long edge 1″ and the pencil marks are 3/4 and 2 and a quarter inch from the end.

This will speed up the process of screwing these boards to the base later.

I cut the pair of 2×10’s for the base down to length and laid out the spacing of the side boards. I used a scrap piece of half inch plywood for one spacer, and an off-cut from a side board for the three quarter inch gap.

The gaps in the side boards alternate between half inch and three quarters along the length of the jig. Half inch for the rope, three quarter inch for the chainsaw blade.
I drilled pilot holes in the top 2×10 to also speed up the assembly. And applied some exterior wood glue and screwed the two together. I used a few extra screws as there was a slight warp in one of the 2×10’s.

Now I had lined up the edges with my speed square but there was a noticeable variation in the width between the top and bottom 2×10’s. To correct this, I set the fence on my tablesaw to the smaller dimension and ran the base through the saw, flipped it end for end, then ran it again. This made the base true and square.

With the base on a flat surface, I’m ready to attach the side boards. I use some glue and my finishing nailer to hold them in place, screws added later. I alternate the spacers as I go along. When I got part way done one side I started again at the other end and finished up in the middle.

I then laid the jig over on some supports to add the screws. The combination of glue and screws will make for a strong and long lasting joint.

Spin the jig around to repeat this process on the other side. 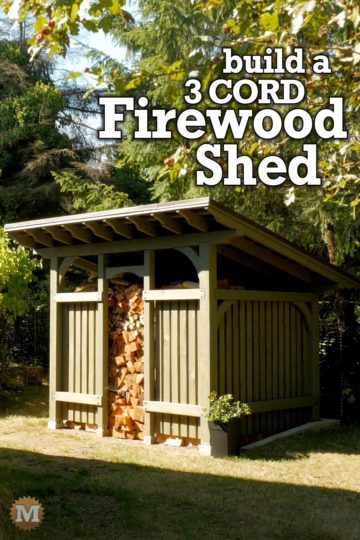 Tools Used in this Project

Tools I Use: If you would like to support this blog, and the videos I create, then see the list of tools I use regularly. Thanks!